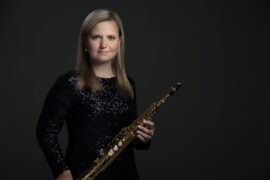 Katrina began playing saxophone in Riga Doma Choir School, where she studied under the guidance of teacher Ieva Sloka. Even though in 2011 she graduated the school in a specialty of choir conducting, playing saxophone has become an important part of her life. As a proof of that are the achievements from taking part in various competitions: International Competition for Young Musicians ‘Sigulda’; Competition for Performers of the Brass and Percussions of music schools in Latvia, as well as in ‘Saxophonia’, where in 2009 Katrina was awarded with 1st place in the third group and special prize – ‘Selmer’ saxophone.

In 2015 Katrina graduated from Jazeps Vitols Latvian Academy of Music saxophone class of Artis Simanis, where she is currently continuing her master studies. She has also polished her skills in various masterclasses of such prominent saxophone players as Jean Pierre Baraglioli, Lars Mlekush, Claus Olesen, Rolf-Erik Nystrom and others.

In addition to her studies in the Academy, Katrina plays music in different chamber ensembles and orchestras, as well as works as a saxophone teacher and conductor of brass orchestra for primary school students in Jazeps Medins Riga Music School No.1. Moreover, she actively performs together with saxophone quartet ‘n[ex]t move’. Since spring 2016 Katrina is member of the Riga Saxophone Quartet.