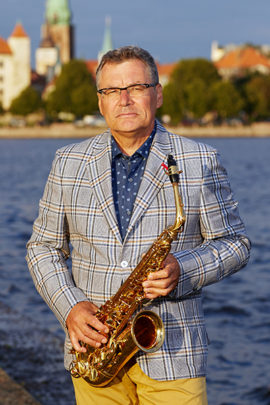 Artis Sīmanis (1958) graduated in saxophone performance from the N. Rimsky-Korsakov Saint Petersburg Conservatoire in 1986, where he studied with Andrei Bolshianow. He holds a Concert Diploma from the Danish Royal Academy of Music, where his professor was Jørgen Bove (1994). In 1995 he received a Master’s degree from Jāzeps Vītols Latvian Academy of Music.

Artis has appeared with the Latvian Radio Jazz Orchestra and with Pete Anderson’s rock group Archive and performed as a member of the Latvian National Symphony Orchestra, Riga Festival Orchestra and Moscow Philharmonic Symphony Orchestra. As a soloist he has performed with the Latvian Philharmonic Chamber Orchestra and as a guest artist – with the Danish Saxophone Quartet in Italy and Norway. He has made many recordings for the saxophone for the Latvian Radio archives. Currently he has an active performance schedule with Kristīne Adamaite (organ) with whom he has recorded four CDs.  Besides being the Saxophone class Professor, from  2007  to 2017 he was the Rector of Jāzeps Vītols Latvian Academy of Music.

Artis Sīmanis is the founder of the Riga Saxophone Quartet /RSQ/ (1992). RSQ has performed in Norway, Denmark, Finland, Sweden, Estonia, Russia, Lithuania, Poland, Chech Republic, Austria, Germany, Portugal, Canada, USA, China, France, Croatia, Slovenia, Ireland, Bulgaria, Romania, Italy, The Netherlands, Israel, Bosnia and Herzegovina, Kazakhstan, Macedonia, Kosovo, Uzbekistan, Belorussia and India.  Apart from that Artis Sīmanis is the initiator and Artistic Director of the International Saxophone Music Festival Saxophonia (the festival has been held regularly since 1999).  In 2010 he was the recipient of the Order of the Three Stars of the Republic of Latvia for exceptional achievements in popularization of saxophone music. For strengthening cultural ties with France he was awarded with the Order of Arts and Letters by the Republic of France in 2016.